Last Friday, the 21st of October, Taylor Swift released her tenth (and arguably one of her best) studio albums – Midnights.

We Swifties truly hit the potluck because she gave us 20 new tracks for us to soak in… and freak out over. Today’s post is a review of all the songs and a ranking at the end. The ranking, mind you, was one of the hardest things I’ve had to do, and that’s saying something because none of the songs was bad.

But I love the whole new electro-pop vibe and the incredible lyricism in her songs – they really resonate with you – and that’s one of the main reasons I simply adore her music. I’ll be doing only the 13 main tracks and my favourites off of the 3 am tracklist today!

“i feel the lavender haze creeping up on me; surreal.”

This song begins with a False God-esque vibe and goes on to a sort of bubble-gum pop tune. I love bridge; when she goes into that falsetto, the whole dreamy aura is brought back from the Lover era. Also, the chorus is extremely reminiscent of I Think He Knows, but maybe that’s just me. Anyway, this one wasn’t a huge standout, but definitely near the top for me.

“and i wake with your memory, over me; that’s a real lasting legacy to leave”

The first time I heard this song, I kid you not, I nearly cried. SO much emotion in the lyrics, in the chorus, and even in the harmonies. It’s possibly my favourite on the album, and it’s so, so beautiful. It’s one of the slower songs off of Midnights. My favourite part, personally (apart from the bridge, of course) is when she sings ‘the rubies that I gave up.’ It’s just… wow.

Being the lead single, I thought this was going to be just another pop song, but no. In fact, probably the most relatable lyrics she’s ever written. Anti-Hero has everything – a catchy melody, a music video (!!) and really, really well-written lyrics. (Except for the second verse; I’m sorry, I do not understand that reference.)

“this scene feels like what i once saw on a screen; i searched ‘aurora borealis green'”

There’s a meme that’s been floating around saying that Snow on the Beach was so good, it left Lana Del Rey speechless. And that’s more or less true. But, if you go into the song not expecting much from Lana, you’ll like it. It gave me a very Christmas-Carol energy in the beginning, but it’s a really lovely song. I just wish Lana had gotten a verse – it would have done wonders for the song!

“you’re on your own, kid. you always have been.”

Yet another incredible track has been added to her infamous list of Track 5’s. You’re on Your Own, Kid, or YOYOK as it has been graciously abbreviated, is saddening. The lyrics are a throwback to the 1989/reputation era, but if you don’t pay attention to the lyrics, the song is actually pretty upbeat. It’s another one of my favourites, definitely.

The beginning of this one was really a jumpscare, I had to go back and check if it was the right song or not?! My friend and I (we had a very chaotic listening party) were completely confused but then the song got really good. After a few listens, I grew to absolutely LOVE this one – it’s actually one of my favourites.

It reminded me of Jo and Laurie from Little Women, one of my biggest should’ve-been-together’s. Or Nico and Will (the whole sunshine/midnight rain thing.)

“can i ask you a question?”

‘I REMEMBER,’ the song starts, in a very Out Of The Woods style, and she even sampled the adlibs from one of her lives in the chorus. My favourite part of this album is how each song refers to one of her previous eras. This song took some getting used to, but I definitely enjoy it more now. I especially like the part where you can actually hear people clapping in the end, I don’t think she’s done something like that before.

“lately i’ve been dressing for revenge.”

This one gave me HUGE no body, no crime vibes – and wow, it’s a good track. I mean, not so much with the melody, but the theme and even the Spotify canvas were so good. I think she was trying something new with this track, but it worked out pretty good. It wasn’t one of my favourites on my first listen, but I don’t hate it now.

“and i miss you… but i miss sparkling.”

In all honesty… I just did not like this song when I listened to it the first few times. When it got a music video yesterday, I did look at it from a slightly different perspective, but it’s still on the bottom few for me. The whole song just seems a little bit off, but it’s still good. And the intro sounds a lot like Anti-Hero.

“karma is the thunder, rattling your ground”

This is the ME! of the album. Definitely. The most glitter-gel-pen-ey song there is. It’s quite different from the rest of the album (compare the lyricism of this to the lyrics of Maroon and you’ll see what I mean,) but it’s a fun song to listen to, nevertheless. I thought it was pretty ingenious of her to put out a track like this after we’d been speculating about Karma as a “forgotten album,” haha.

“you’d break your back to make me break a smile”

This was, on my first listen, and on my most recent listen, one of the BEST tracks on this entire record. I loved every single aspect of it – the gold rush verses, and the “uh oh, I’m falling in love” part. It’s the first one I learnt to play on the piano and the guitar, and it’s simply beautiful. That lyric above is my friend’s favourite and I simply adore it, too.

“and i find myself running home to your sweet nothing”

I’d claimed this track as my song days before the album’s release and it is incredible. It’s a typical slow, pretty song, with amazing lyrics. It is, without a doubt, a top-three song for me; I love everything about it. The humming in the kitchen or her being too soft for all of it. And the gentle piano. It’s everything. I read somewhere that it’s sort of a reply to peace – would it be enough if I could never give you peace? All that you ever wanted from me was sweet nothing.

“the dominoes cascaded in a line”

This song probably raised the most intrigue when its title was announced but it’s actually a pretty soft song when you look at it. It talks about how she’s always had everything planned out, but then there’s someone who’s always one step ahead of her. It didn’t really appeal to me at first (because I wasn’t paying attention to the lyrics) but I like it now. It’ll take some more getting used to!

These tracks were just folklore and evermore but better. My favourite three, in this particular order, were Bigger Than The Whole Sky, The Great War and Would’ve Could’ve Should’ve. And Paris, of course, gets a special mention for being the most upbeat song on the tracklist. I think a few of the 3 am tracks were better than some of the originals, but it made sense to include them as bonus songs.

As I mentioned, I do love most of the songs on the album, but there were obvious favourites! And some that weren’t so great. So after around four days of streaming Midnights continuously and incessantly, here’s the ranking. I highly recommend you listen to it; it’s now one of my favourite albums. EVER.

I hope you had fun reading this, because I certainly had a lot of fun writing this – going through my very haphazard tweeting and chats with my friends on release day, relistening to the whole album, and of course, finally learning the lyrics. Release weeks are always so, so fun, and I think we’re getting Speak Now (tv) next?! Cannot wait.

On a completely unrelated note, Pretty Little Scribbles turned TWO on the tenth of October. It’s unbelievable; I started this little site as a hobby I thought wouldn’t last for more than a couple months, tops, but it’s such a big part of my life. Just... writing. Thank you for being here <333

Have you heard Midnights? (or are you living under a rock?) If you have, what’s your top three, or favourite song? Do we have similar opinions? If you haven’t, what are you waiting for!? Until next time xx

21 thoughts on “midnights: a taylor swift album review ⭐ stars by the pocketful” 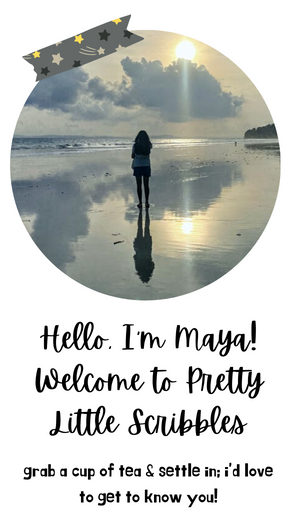 Hi there! I’m Maya, the girl behind screen. Welcome to my little corner of the internet to  dream, to write, and to inspire. Pretty Little Scribbles is a teen lifestyle and review blog, and I hope you find something to read & to resonate with here!

I post every other Sunday and the occasional book review (or I try to, haha!) I’m currently loving Midnights, the album, Gilmore Girls, and Colleen Hoover’s It Starts With Us.

Grab a cup of tea and settle in – I’d love to get to know you!

The textual contents, and any graphics with text on it is © Pretty Little Scribbles 2020-2022.
Well, not officially, but do not use anything without permission and crediting me with a link to PLS.
Please read this for more information. Thank you for visiting my blog ♥